Why to Upgrade from Oracle EBS to Oracle fusion? 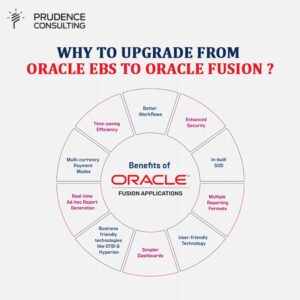 Oracle E-business Suite (EBS) was released by oracle in 19 years. Oracle EBS consists of Enterprise Resource Planning and Customer Relationship Management applications. Later in 2011, Oracle Fusion was introduced but businesses have not switched to Oracle Fusion due to its complete familiarity with Oracle EBS. The Oracle EBS is moving toward the end of support that is why switching to Oracle fusion is now unavoidable.

What is Oracle EBS?

Oracle EBS is basically, Oracle E-business Suite. Oracle helps businesses with different types of processes. The processes include Enterprise Resource Planning, supply chain management and Customer Relationship Management. Oracle has been updating the package ever since its release.

Why move to Oracle EBS and Oracle Fusion

People, who have been working on Oracle EBS for 5 to 10 years, would not agree to move to Fusion because they are habitual of using EBS. Fusion also requires more cost and high skills as compared to EBS which makes it harder for the employees to switch to Fusion immediately. They ask about the need of migrating to Fusion from EBS, so the answer is simple. Fusion is more advanced with new technology and next-generation ERP. UX, UI, and AI are also the features of Oracle Fusion which are advanced than Oracle EBS. The positives and negatives between Fusion and EBS should be considered before making the move from EBS to Fusion.

Oracle has released EBS and Fusion so many people think that both of these will be the same. The reason that Fusion came a lot later than EBS is sufficient to know that Fusion is newer and more advanced than EBS. The technology has advanced rapidly during the window of 10 years from 2001 to 2011. Despite people thinking that there are similarities between Oracle EBS and Oracle fusion, but this is not true. There are differences between EBS and fusion that are given below. Considering these differences between EBS and Fusion will help you make a better decision when you think of moving from EBS to fusion.

The procedural language used by Oracle is PL/SQL while Business Process Execution Language (BPEL) is used by Fusion which is seamless and a lot smoother. For reporting, PL/SQL is used by EBS whereas BI Publisher and XML formats are used by fusion.

Data is stored by EBS in BLOBs whereas; Oracle Universal Content Management is used by Fusion which was previously known as Stellent and it is acquired from Stellent. Based on hierarchical approvals, it is a simpler solution for ordering an enterprise’s document management requirements.

Fusion is capable of offering a combination of Siebel and People Soft along with Oracle E-business for the data model which is more effective than EBS. Fusion also offers different enterprise solutions in a wider range than EBS.

Oracle Discoverer is used by EBS which is now kicked out by Oracle Fusion. Fusion uses an advanced Oracle Business Intelligence Enterprise Edition (OBIEE) which is supported by and is compatible with Oracle database updates, Microsoft Windows, Internet Explorer.

Oracle EBS combines with Oracle and non-oracle applications with the help of Application Integration Architecture (AIA) while Fusion does this by AIA, BPEL, and other web services.

Table of differences between Oracle EBS and Oracle Fusion

The table below shows the difference between Oracle EBS and Oracle Fusion in a form of a table.

The workflow is better of Fusion as compared to that of EBS.

The security of EBS is not of the same quality as that of Fusion.

The export can be done in Fusion by using any format when reporting has to be done but in EBS the export functionality is very limited. Reporting is a great feature of Fusion.

There are fewer complexities and technicalities involved in Fusion than in EBS.

Users can locate problems using dashboards in Fusion which makes it easier for the Fusion users to identify problems.

Fusion has a multi-currency payment which is not available in EBS.

The decision to go migrating from EBS to Fusion is a big one. Few businesses that have moved from EBS to fusion have talked about the convenience of fusion as compared to EBS. Still, businesses struggle while making this decision. There are challenges and requirements involved in shifting your data from EBS to Fusion because of the performance, control, and security.

Oracle has recommended solutions for migrating from Oracle EBS to Fusion for safe migration. The solution is available based on experiences that were collected from a successful customer who has done this move.

The solutions focus on technical requirements, key implementation concerns, and business challenges that are involved in this migration. The Oracle E-business suite is already doing the order management, manufacturing, procurements, logistics, and financials. Oracle EBS may have been customized to fit your needs and deeply combine it with other applications for the smooth running of daily operations. Therefore, starting with a new software a as service (SaaS) might not make sense but by using infrastructure as a service (IaaS), you can accommodate everything you do with flexibility. IaaS gives you control over the security, performance, and business continuity plan.

Besides the advantage of being uncomplicated to migrate, easy to manage, and flexible to scale, EBS is cheaper than Fusion to run on-premises. Approximately, the cost of this solution is 38% cheaper than on-premise and 44% lesser than running on the cloud, based on:

Six environments are: 1 for staging, 1 for testing, 2 for Production, 1 for Quality assurance and 1 for development.

Oracle fusion is specially designed for supporting workloads like Oracle E-Business Suite due to which the Oracle Fusion is capable of offering a host of infrastructure support systems and tooling support as well.

Higher storage, performance compute, managed database instances and networking are the features of Oracle fusion because of which, it can provide a high-performance experience for the users at lesser operational costs. Oracle Fusion is the only platform where you can run the Oracle Database Exadata Cloud Service or Oracle Database with Oracle RAC. Lesser robust configurations are a limitation of other cloud systems.

On top of it, specific tooling and automation are provided by Oracle fusion for efficient upgrading, migration, deployment, and maintenance of the implementation, along with lessening the risk, expertise, cost of operation, time, and day-to-day operations.

The steps involved in upgrading are the same as other steps. The steps will include:

The diagram below shows the steps involved in migration from Oracle EBS to Oracle Fusion:

Two businesses that have done the Migration

Below are the cases of two businesses that have implemented the change of migration from Oracle E-business Suite to Oracle fusion and benefited from it.

Murad is a well-reputed skincare brand that has specialized in anti-aging treatments and acne. Unilever has been operating this company since 2015. A corporate-wide initiative was launched by Unilever to increase the experience of consumers, by facilitating more efficient and faster back-office operations. Before this, Murad used to maintain its hardware in a co-located data center using borrowed capital to increase profit with Cisco UCS hardware and after every 3 to years, they refreshed them. They were about to refresh the Hardware cycle when they discovered Oracle Fusion and explored it based on their operational needs and key business. This helped them in getting 30% increased performance, their cost was decreased by 30% and r reporting time was reduced by75%.

Darling Ingredients is known to be the world’s largest producer of sustainable ingredients. This company was going through old hardware in a co-located area that hosted key infrastructure. The goal set by Darling ingredients was to not increase the cost but modernize the solution when the contract was to be renewed. Many cloud providers were tried but they found that the performance and reliability lack.

Then they tried Oracle Fusion which was able to provide them with the predictable high-performance infrastructure that they needed for their Oracle Database and the application that was dependent on it. Their performance was doubled from their previous solution and strengthened down from 19 database systems to 3.

“The results were clear, professional, and persuasive, and the investors and advisors who have seen the materials loved them. They know what investors want!”